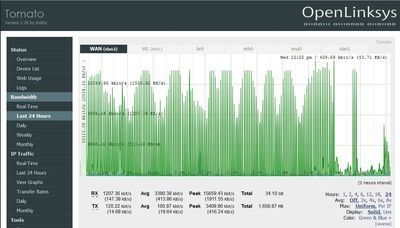 It is difficult to describe to users just what bandwidth is. To end users, Internet bandwidth is just something that is there and they take it for granted with little appreciation. They are not concerned about bandwidth limitations, or that they may be consuming more than their fair share of a corporate resource. Unless you are an IT person, concerned about keeping things running smoothly in your computing environment, you probably don't think about bandwidth at all.

When you sign up for Internet Service, whether it be through a cable company, phone company, or some other specialized provider, you have to choose from multiple levels of service or “speed”. You have to balance between how much you think you need with how much you can afford. All you know is that faster is better for some reason. This Internet speed is measured in Mb/s, or Millions of Bits per Second. You may have different speeds for upload and download. It is not uncommon for the upload speed to be quite a bit less, like 25% of the download speed. Thinking about all this makes your head spin. You close your eyes and decide to take the “middle of the road” package.

If you are getting Internet for your home, the sales person may ask if you intend to watch videos such as Netflix, or Amazon Prime movies. If that is the case, you will want to skip over the cheapest package and get something with more bandwidth. Unless you are a computer guru, you probably won't need the highest bandwidth package but it is there if you should ever decide that you want your Internet to be faster.

In a business environment, it is assumed that the Internet is to be used for gainful purposes, and not simply for entertainment. Of course you want to have enough bandwidth to allow for web surfing and e-mail, along with occasional downloads. Many business applications are in the cloud these days and therefore require Internet bandwidth to be able to use them. In your business, you have many people sharing a single Internet connection. The assumption is that not everyone will be using the Internet at the same time, but you want enough bandwidth to make users think that they have it all to themselves.

Let's say, for the purpose of this article, you have a medium size company with 40 employees who have access to a computer and use the Internet to do their jobs. All these computers are connected to a wired or wireless network and everyone's Internet traffic is funneled through a router. A router is a device which physically connects your company network to the Internet. It actually does much more than that, but for this article, that is how I want you to picture it.

I try to get people to understand bandwidth as being something like the water pipe where you get water from the water company. This pipe is a certain diameter. Maybe it is 1 inch for a home, but a business may have a 4 or 6 inch water line coming in. In any case, there is only a certain amount of water that the water company can provide per minute or hour through that pipe. In your home, you may experience the water pressure dropping if too many people or devices are using the water at the same time. Taking a shower while the washing machine and dishwasher are running might do the trick. If you want to be able to do all these things at once, you need a bigger pipe (bandwidth). I remember one time when I was in school, a bunch of us kids got into trouble for flushing all the toilets in the building at the same time. This of course brought the water pressure down.

Internet bandwidth is different from buying water from the water company because the water company bill is based on how much you actually use. Internet bandwidth is normally billed based on the amount of bandwidth that is available through the pipe. There are exceptions to this. Most cell phone data packages have limits to the amount to data you can download per month. They charge an extra fee if you go over their limit. Your Internet provider is not going to like you much if you actually use all the bandwidth that is available to you. They would quickly lose money if all their customers start using lots of bandwidth and they would have trouble trying to actually provide what they sold. The appearance of Netflix, Amazon Prime Video, and other streaming video and audio services all of a sudden caused the amount of bandwidth that customers use to skyrocket. Netflix alone accounts for about 83 percent of the bandwidth on the entire Internet and has the Internet providers scrambling to find ways to conserve their resources. If you have two or three people in your company watching Netflix on their lunch hour, your Internet speed will probably come to a crawl for everyone else.

Bandwidth Hogs are people, or computers, or programs that use way more bandwidth than the average user. A single bandwidth hog may account for 90 or more percent of the company's entire Internet traffic. Typically people could care less about how much bandwidth they use. They don't pay for it, and they do not understand the concept that their Internet is not unlimited. They think nothing about using their computer for entertainment, listening to their favorite radio station, or watching a news or sports broadcast in the background. These days, you may well have many more Internet users on your network than you planned for. These users are in the form of smart phones and tablets that people bring from home and connect to the wireless network. People do not realize that each one of these devices are fairly powerful computers themselves and any one of them can become a bandwidth hog and bog down your Internet.

It is not just people that can be bandwidth hogs. Many times a computer may have a virus that consumes a lot of bandwidth. Usually these bandwidth hogs can be hard to detect unless you have a way of monitoring the traffic on your router as shown below.

Corporate policy should be implemented to discourage this kind of use. Not only should end users stick to using their Internet for business purposes, they should also do what they can to keep their computers free from viruses that may consume a lot of bandwidth. Of course you can opt for the larger bandwidth package from your Internet provider, but this is only a temporary solution. What are you going to do when more people start hogging the Internet and you are already paying a high price for the largest bandwidth Internet package?

A good router, such as the Tomato Routers that we install, will allow you to view the amount of bandwidth your company uses in a graphical form. Often times a bandwidth hog will show up as a spike or unusually high usage pattern. Sometimes they just stick out like a sore thumb on the bandwidth chart as shown below.

Here, a user, actually a user's machine either has a virus on it, or the user walked away with a constant stream of Internet audio or video playing on their computer continously. Notice that this bandwidth continues through the night when nobody is in the building. This is an actual example where I alerted the local IT person of the problem. The computer was located by IP address and shut down shortly after 8:00 a.m. Traffic normalized except for a brief time around 9:30 a.m. when the offending application started back up for awhile, was detected, and shut back down. The lower levels of traffic represent what the other 30 of our 40 employees were using at the time. You can see that one bandwidth hog can suck up all the Internet bandwidth and slow things down for everyone else.

Many problems can be detected by having a good router, such as the Tomato routers we use, to monitor bandwidth usage and spot abnormal patterns. One way to regulate bandwidth hogs is to implement a QOS, or Quality Of Service feature on a good router. This will more fairly divide up Internet bandwidth in a way that no one user can dominate. Good corporate policy, along with implementing QOS should keep your Internet bandwidth usage under control until you reach the point where you really do need to sign up for that higher bandwidth Internet service.